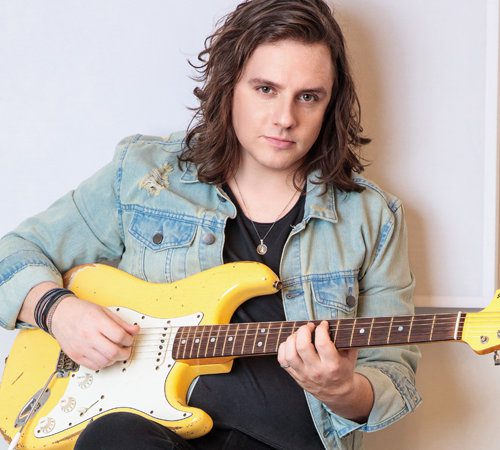 “Thou shall not sacrifice your firstborn to the gods of Moloch.” (Leviticus 18:21) Singer-songwriter JAMIE KIMMETT had no idea how much impact this one verse would have on his decision to lay down his own dreams to faithfully pursue a God he once didn’t believe in.

Born and raised in the working-class town of Kilmarnock, Sco tland, faith didn’t play a part in Kimmett’s life early on. He excelled at soccer, was part of the Scottish National Youth Squad and was even scouted by professional clubs like Scottish champions Celtic FC. At the same time, music was becoming a serious interest. “The first cassette I ever wanted was Michael Jackson, Dangerous,” Kimmett shares. “I heard his voice on the radio and said, who is that? I had to have it.” He taught himself to play guitar, a 16th birthday gift from his father and entered his town’s Pop Idol contest (a precursor to American Idol in the states). He won the contest, sparking a deeper interest in pursuing music full-time.

After graduating from Napier Music School in Edinburgh, Scotland in 2008, Kimmett posted a few demo tracks on MySpace and was soon contacted by a manager in Los Angeles who offered to fly him to America. He arrived in LA to a team of people ready to make his ambitions in the music industry a reality. Jamie had various experiences in California where they Lord pursued him ultimately leading him to Christ. “The magnitude of realizing Jesus died on the cross for me was an overwhelming experience and became the most beautiful and important hope in my life.”

Within a week of finding faith, Kimmett was invited to the biggest music meeting of his life, a meeting with a major pop record label. Performing in their offices, he impressed the executives and was offered a record deal, the very thing he had dreamed of since his 16th birthday. “The label was all in,” he shares, “and offered me the dream, the thing I’d been working so hard to get. But I was having a huge spiritual check, like, would this be good for my faith? I told them I needed to go home to Scotland and think about it.”

Upon arriving home, Kimmett went to a church he picked from Google search results and knocked on the door. “A woman opened the door and I said, ‘Jesus has saved me.’ She said, ‘That’s wonderful! Come in.”’ After the service, Lorna, the woman who had opened the door, took him to coffee to hear his story. He told her about the record deal and his dilemma. She told him God always speaks through His Word and asked if he would be willing to read the Bible with her. Kimmett agreed. “The passage was from Leviticus. It was a surprising Old Testament verse she shared with me. It said, ‘Thou shall not sacrifice your firstborn to the gods of Moloch.’ I said to Lorna, ‘I know you mean well but I’m not seeing the relevance to my situation.’ Lorna repeated that God always speaks through His word.”

Kimmett flew back to LA for a second meeting with the executives. The dream record deal was sitting on the table, ready to sign. “I’m sitting in the conference room with the President, the execs and my lawyer, pen in hand, unable to say yes…questioning if this is what God wants me to do.” After a few minutes of silence, one of the executives, exasperated with his hesitation, gave an ultimatum. “The deal is today,” he said. “There are people who would sacrifice their firstborn child for this opportunity.” The verse from Lorna’s Bible study flashed through Kimmett’s mind and he had his answer. God had spoken through His Word. Even in his brand-new faith, he knew pursuing God was more important than pursuing fame. He walked away from the deal.

Now, back in Scotland, Kimmett threw himself into the church and reading the Bible, learning to unpack scripture and how to apply it. God went from being experiential to being something tangible and accessible. He began sharing the gospel with anyone who would listen. He enrolled in the Cornhill Training Course, part of The Proclamation Trust, an organization that trains men for preaching and pastoral ministry. His first placement was with an Anglican church in Hampstead, London and then with a Baptist church in Hammersmith. During the week, he would apprentice with the church pastors and on Saturdays he would busk in front of Big Ben to pay rent and put food on the table. “I’d sing 4 hours of pop covers, Michael Jackson, Stevie Wonder, John Mayer, and the last hour I’d sing about Jesus.” He hardly made any money singing songs about his faith but found fulfillment in ministering to people. “Every week I’d be so excited to finish the pop stuff and get to worship. It got to the point where I didn’t want to do the pop stuff anymore, but I had to pay rent.” The next week Kimmett showed up and, instead of launching into pop hits, he prayed and heard God say, “Seek first the kingdom of God.” (Matt 6:33)

Feeling led, he played his own Christian songs instead of the pop covers and within three hours, made more than double his usual take. “It wasn’t about the money, but about the Lord’s promise to take care of me. I mean, strangers approached me saying serve God with your music, handing me 50 quid notes, and all the while the scripture to honor God first was burning in my heart. I determined in that moment, from now on my music and faith come together.”

“When I was preaching, I wanted to do music. When I was doing music, I wanted to preach.” Doing both music and sharing the gospel seemed to be the answer, which led him to the Christian music capital of the world, Nashville, TN. Kimmett saved up enough money busking to make the journey back to America without a single contact or meeting set up. All he had was a strong belief that God was leading him to Nashville. Through cold-calling churches and a contact from his time in L.A., he found a place to stay and got a meeting with Reunion Records/Sony Music. transformative love in a God who saves, but that suits him just fine. “Where once there was emptiness, I’m now called His child.”

Jamie Kimmett’s truth-fueled songs and soulful vocals are set to carve a new ministry path, combining his gift for songwriting with his passion for sharing the gospel and leading worship.

You can see more about Jamie at www.jamiekimmett.com

“Jamie has an amazing story of God pursuing him and in turn Jamie has give his life and talents to bringing God glory. I have been impressed with his heart to reach and lead people both in song and in the scriptures. We are thrilled to have him leading at GENERATE.” – J. Roger Davis